IHS does not stand for “In his service” like they would like you to believe.
IHS in exoteric = In His Service
IHS in esoteric = Isis – Horus – Seb *Egyptian Trinity*

IHS is derived from the pagan Greek word form Jesus ΙΗΣΟUΣ. In the pagan religion, Horus was the divine son of Seb and Isis (Father/Holy Spirit). This is where the false doctrine of the Trinity originated and why the “Virgin Mary” was elevated to Queen of Heaven and Mother of God. So, the term we use “Jesus H. Christ” in reality H stands for Horus the divine pagan son of Isis. YHVH was given pagan symbols such as the blazing sun and associated with Apollo the Sun god and worshiped on Sunday the day of the Sun God.

“The Sabbath question is to be final issue in the great final conflict”.

Scripture reveals that Satan’s goal is to be worshiped as God. His pompous declaration was that he would “sit on the mount of the congregation in the sides of the north”. It is quite apparent that Satan has indeed already in part, accomplished his goal via a counterfeit calendar and His man-made units of time. Armageddon, as outlined in Scripture appears to be a war of calendation. In the original Hebrew it is defined as the “rendezvous at the mountain” or “mountain appointment.” So then, a battle over “mountain appointments” is a battle over two opposing “mountains of time,” the true and the counterfeit. This will be the great and final battle between the Creator’s lunisolar calendar of Creation, and the Luciferian inspired Roman Gregorian calendar of man’s creation that utilizes unbroken-cycles-of-successive-weeks.

I’ve read many sources that have led me to believe that the lunisolar calendar was not changed, but merely reformed/altered. I also believe that this was done by the Luciferians to deceive the Christian masses into paying homage to their Sun god; while the masses ‘think’ they are in accordance with Biblical scripture.

According to the Lunisolar calendar; the Holy Sabbath actually falls upon Saturday, not Sunday as the Julian/Gregorian calendar(s) now support due to the reformation of the ‘Roman” Catholic Church in 1517 by Pope Leo X and was the pope who planned the initial church reaction against Martin Luther until his death in 1521.
The Creator’s Lunisolar Calendar
Understanding Julian Calendars and Gregorian Calendars in Genealogy

Aroueris, or Thoth, one of the five immortals, protected the infant Horus from the wrath of Typhon after the murder of Osiris. He also revised the ancient Egyptian calendar by increasing the year from 360 days to 365; one day was added to honor each deity. I will go into more detail in a later post; as this time concept deserves its own article.

The Roman Catholic Church responded with a Counter-Reformation initiated by the Council of Trent and spearheaded by the new order of the Society of Jesus (Jesuits) specifically organized to counter the Protestant movement. This was because the Roman Papacy was identified as the Antichrist by the Protestants. Rome never fell – they merely transformed themselves into the ‘Roman’ Catholic Church. If you compare the signatures of the Pope and that of the Emperors, you will notice they always follow their signatures with the initials P.M. – Pontifex Maximus

Pontifex Maximus translates to greatest pontiff and was the highest Roman priestly office.

As far as the Jesuit/K.C. Oath; it is said it exists on record but I have never been able to authenticate this assertion. US Congressional record/US Library of Congress: I could not confirm it’s existence. But I did find it in here: THE SUPPRESSED TRUTH ABOUT THE ASSASSINATION OF ABRAHAM LINCOLN by Burke McCarty, pages 21-23

The leader(Jesuit Superior General) of the Knights of Columbus is the Black Pope.

Just thought I’d share ‘some’ information for those of you who may not yet know and may be interested in exploring esoteric history.

It’s relatively a simple, but time-consuming process, to discover these things. Understanding its ideology is another & is what I feel creates the mass confusion in the truth movement as to who’s behind it all. Once you spend enough time researching the religious conspiracy aspect of the New World Order; it becomes abundantly clear who’s really running it all & what they actually believe. All roads really do lead to Rome. 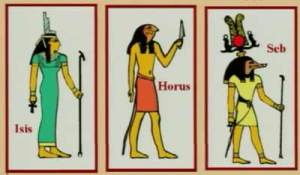 These videos cover deeper Jesuit aspects not covered in the article

The Illuminati “Front Organization” for the Jesuit order
http://www.youtube.com/watch?v=2Qfk6Kpf7jE&hd=1

One thought on “IHS”